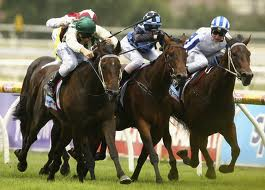 By deanJanuary 18, 2012General
No Comments

Peter Maher has enjoyed French Classic success with Poule d’Essai des Pouliches (Gr 1, 1600m) heroine Valentine Waltz (Be My Guest) and he looks to have a potentially smart filly in the shape of Total Attraction (3 f Nadeem – Endless Charm, by Lion Cavern), who made it two wins from as many starts when coming with a strong challenge in the straight to win the $70,000 Ian Miller Handicap for three-year-old fillies over 1400m.  Total Attraction was in last place in the small field and came home with a swooping run into the straight to reel in the leader and then draw away to win by a widening one and three-quarter lengths over the Darley-homebred Gig (Commands).  “I think she is probably a race day horse and probably doesn’t do as much at home,” Jeff O’Connor, racing manager for trainer Peter Moody said. “It has been a surprise that she has been able to do it at her first and second start. The way she is racing, we had her pegged at her first start that she would run a mile so she is on track to progress to that.”

Total Attraction was purchased for $30,000 as a yearling by Belmont Bloodstock Agencys Damon Gabbedy at the 2010 Inglis Premier Yearling Sale from the draft of Damian Gleeson’s Phoenix Broodmare Farm.

Total Attraction is by the Darley based Blue Diamond winner Nadeem & has a great pedigree.  Her dam is a half sister to the terrific racemare INFINITE CHARM who retired as the Group winner of 7 races & over $850,000 in prizemoney.  Her best win came in the Gr 2 MRC Tristarc St a race she won twice.  The grandam of this promising filly is a half sister to the iron horse FIELDS OF OMAGH whose 13 wins included 2 Cox Plates.  This pedigree is one that improves with age & maturity & you would expect TOTAL ATTRACTION to get better with age.

Peter Maher & his wife Jo were on hand to witness their filly along with partners Ms M T Farrell & Ms W E Prentis & TOTAL ATTRACTION already look to be a bargain buy.