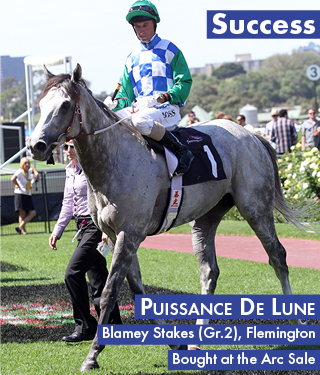 By Sally WilliamsMarch 12, 2013General
No Comments

ARQANA’s Arc Sale yet proved itself as an outstanding source of high quality tried horses for the Australian environment when three graduates of the sale won on city tracks over the weekend.

The first was the David Vandyke trained Prince Cheri (Lando).  Racing for the first time in Australia, Prince Cheri won comfortably over a mile at Canterbury on Friday night.  Prior to his arrival in Australia, the stallion had had only 2 starts for a win and a second in a listed race at Clairefontaine.  He was purchased for 65,000 Euros at the 2012 Arc Sale from Mikel Delzangles.

On Saturday at Warwick Farm, Lunayir (Sinndar) posted his first Australian victory for the Chris Waller stable.  Lunayir won by 1.5 lengths over a mile and holds a nomination for the upcoming Doncaster Handicap.  A winner in Chantilly before coming to Asutralia, Lunayir was also a purchase from the 2012 edition of the Arc Sale.  Lunayir cost 150,000 Euros and was sold by The Aga Khan.  He was purchased by Hubie DeBurgh on behalf of the OTI Racing Syndicate. 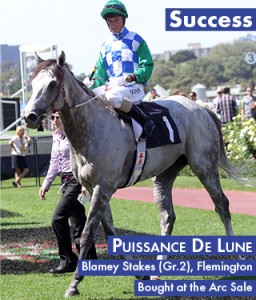 Completing the Arc Sale treble was the very exciting Puissance De Lune (Shamardal) who dead-heated for a win in the Group 2 Blamey Stakes at Flemington.  The grey son of Shamardal who is trained by Darren Weir won the Group 3 Queen Elizabeth Stakes last spring by a most dominant 5 lengths which earned him early favoritism for Australia’s richest race in November.  Puissance De Lune was purchased from the 2011 Arc Sale for 90,000 by Robert Roulston from The Channel Consignment.  He is raced in Australia by Gerry Ryan’s Limerick Lane Thoroughbreds.

The Arc Sale is held annually at Saint-Cloud on the eve of the great race The Prix De L’Arc De Triomphe.  It is a select sale of tried racehorses.

The next ARQANA Sale is the Breeze Up Sale held in Saint-Cloud on May 11.