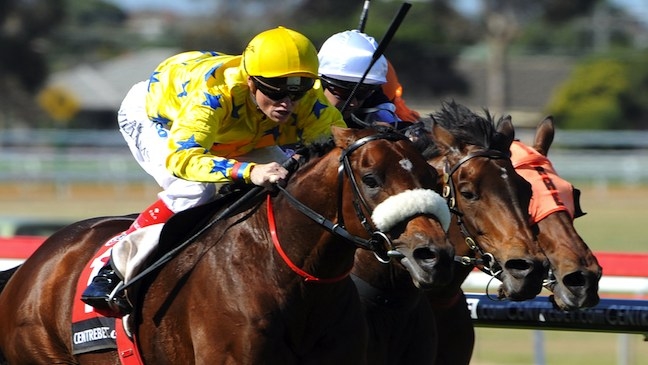 DUNADEN takes another Geelong Cup back to France

By deanOctober 20, 2011General
No Comments

Yesterday’s Group 3 Geelong Cup (2400m) was taken out in impressive style by French raider DUNADEN (Nicobar x La Marlia).  Ridden by Craig Williams, the 5yo carried 58kg to win by just under a  length beating Tanby and 2008 Melbourne Cup 2nd placegetter Bauer.  Williams made his run on Dunaden from third last around the field at the 600 metres and loomed up to the leaders rounding the home turn.

In a moment of déjà vu, the French galloper is hoping to emulate AMERICAIN by going on to win the Melbourne Cup as his fellow French compatriot did last year.  Dunaden is the fourth overseas trained horse to win the Geelong Cup in 10 including Media Puzzle and Bauer.

Trained by Mikel Delzangles, DUNADEN has had 24 starts in Europe for 6 wins including the Group 3 PRIX DE BARBEVILLE at Longchamp in April, and 14 placings.

DUNADEN is proof that there is a bargain to be had at the ARQANA sales, purchased as a weanling at the 2006 Breeding Stock Sale for the tiny sum of €1,500 by Meridian Bloodstock on behalf  of owners Pearl Bloodstock.  With French horses making a dramatic impact on Australian racing in the past year, now is the perfect time to capitalise and think about buying or breeding a quality stayer.  The next Arqana Breeding Stock Sale will be held in Deauville from Saturday 3rd to Tuesday 6th December 2011 and may even have another Geelong Cup winner in the catalogue.