By deanAugust 6, 2012General
No Comments

The upcoming ARQANA Yearling Sale held in picturesque Deauville is the first yearling sale on the European circuit for 2012.

On offer are three fillies by the hottest sire in the Southern Hemisphere, Fastnet Rock.

Lot21 (pictured below), on account of Haras d’Etreham is a cracking filly by Fastnet Rock out of the stakes winning Sadler’s Wells mare Mer De Corail.  This filly is a half sister to Stakes winner Alsace Lorraine (5 wins).  Her grand dam is the champion 2 year old French filly Miss Tahiti who won the Group 1 Prix Marcel Boussac-Criterium desPouliches,France’s most prestigious 2 year old race. 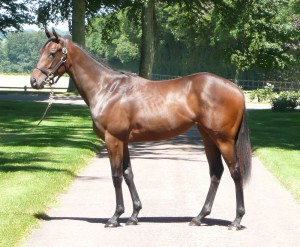 On account of Haras des Capucines is Lot46 by Fastnet Rock out of a 2 time French winning Sadler’s Wells mare Place De L’Etoile.  This athletic filly is the first foal of the mare and is one that could get under everyone’s guard and may be able to be picked up cheaply.

On pedigree the best of the Fastnet Rock fillies isLot162 (pictured below), out of another Sadler’s Wells mare, Group 1 placed Dance To The Top.  This filly has a great residual value, being a half sister to the Group winners Cheshire(4 wins, Gr.3 Grand Prix de Vichy) and Bankable (8 wins, Gr.2 Al Fahidi Fort). 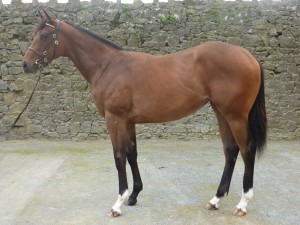 It is interesting that all the Fastnet Rock fillies are out of mares by Sadler’s Wells.  This is the reverse of the hugely successful cross of Sadler’s Wells (Galileo) with Danehill mares (ie. Frankel).  One could expect that European buyers may not comprehend how good Fastnet Rock is and the above fillies could represent great buying.

A huge attraction to the sale is also the first offerings by the absolute superstar Sea The Stars.  The six time Group 1 winner of eight races has everything- looks, pedigree and performance.  He was a star on the racetrack and as if that wasn’t enough, he is a half brother to the undisputed king ofEurope, Galileo.

Sea The Stars is represented by a select offering of 7 yearlings.

Lot 34 is a filly out of the stakes winning Danehill mare Navayo Moon.  It should be noted that superstars Frankel, Golden Lilac and Maybe are all by Galileo out of Danehill mares.  As previously stated Sea The Star’s is Galileo’s half brother.

A filly with Aussie appeal is Lot 48, by Sea The Stars out of Mrs Marsh.  This filly is a half sister to the electrifying Canford Cliffs, a 5 time Group 1 winner of 7 races who comes to Blue Gum Farm in Victoria to stand this stud season.

A potential stallion prospect would be Lot 83, the colt out of Machiavellian mare, Straight Lass.  He is a half brother to Group 1 winning stallion Naaqoos.

My absolute favourite pedigree of all the Sea The Star’s yearlings is Lot 120, the grey colt out of Alpine Rose.  This stunner is the first foal out of Alpine Rose, who won 4 races including the Gr.1 Prix Jean Romanet and she is by the the great Linamix.

ARQANA has devoted a whole website to the first yearlings by Sea The Stars, it is worth a look www.seathefirststars.com

I have been travelling toFrancefor the Yearling Sale for the past 4 years and I believe that this is the best catalogue that has ever been assembled.

Besides the above mentioned there are yearlings by the proven sires Montjeu (8), Galileo (10), Oasis Dream (4), Dubawi (10), and the freakish German sire Monsun (5).

There is an especially good line up of yearlings by Shamardal who no longer visits our shores but has left a big impact.  He has 13 yearlings in the sale. Lot 136 is a chestnut filly by Shamardal and a three quarter sister in blood to dual Group 1 winner Lope De Vega, now standing at Patinack Farm in the Hunter Valley.

First season sire sensation New Approach has 9 yearlings in the sale and an interesting offering is Lot 91, a filly and the first foal out of stakes winning Testa Rossa mare Testama.  From Testa Rossa’s only Northern Hemisphere crop, Testama won 4 races including the listed Prix de Bagatelle at M-Laffitte.

The Aussie dollar has never been better against the Euro, making this a great time to invest in some new bloodlines. With the French Owners Premium and lucrative prizemoney, racing inFrancemakes a lot of sense.

Astute buyers with patience could do a lot worse than buy their Melbourne Cup and staying prospects at the ARQANA yearling sale and who knows another Americain or Dunaden could be amongst them.

The ARQANA Yearling Sale is on August 18-21 in Deauville, France.

Damon Gabbedy is the Australian representative for ARQANA.

For further information or to request a catalogue, please contact Damon on 0408 007 786 or email damon@belmontbloodstock.com