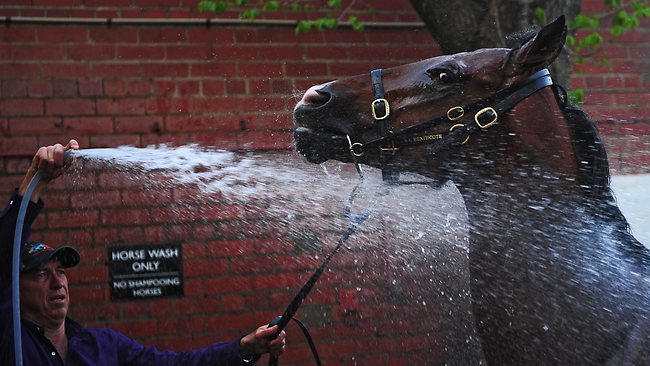 By Holly RossJuly 2, 2014General
No Comments

A successful June for Belmont Bloodstock with numerous winners on the track. Details are as follows.

MAMAROOCHY
The young 2yo Duporth filly Mamaroochy impressively won her second start by a clear three lengths at Northam on the 26th June for trainer Stephen Miller and jockey Jason Brown. The promising filly is out of the Danehill mare Wishes and was a $30,000 purchase from the draft of Kambula Stud at the 2013 Perth Yearling Sale.

GRIMSTER ROCKS
Grimster Rocks won his second race from 9 starts at Belmont Park on the 25th of June over 2200m. The 4yo gelding is by Coolmore stallion Rock Of Gibraltor and is trained by Justin Warick at Myalup. He is out of the Canny Lad mare Navinka and was a $15,000 weanling purchase for Belmont Bloodstock at the 2010 Inglis Weanling and Broodmare Sale from the draft of Fairhill farm.

JO JO GIRL
Jo Jo Girl a 4yo Reset filly won two races this month for trainer Tim Donelly both over 2600m. The first at Wagga on the 6th June and the second at Randwick on the 21st of June. The filly is out of the General Nediym mare Margot’s Slippers and was a $9000 weanling purchase at the 2010 Inglis Weanling and Broodmare Sale from the draft of Bowness Stud. Her race record now stands at 23 starts for 6 wins and 10 placing’s earning over $100,000 in prize money

PRADNYA
The Excellent Art filly Pradnya won at Port Macquarie on the 15th June over 1500m for trainer John Sprague. The filly is out of the Commands mare Pranayama and was a $26,000 Belmont Bloodstock purchase at the 2011 Melbourne Premier Yearling Sale from vendor Anderson Bloodstock.

DREAM DIAMOND
The 3yo Lonhro gelding Dream Diamond notched up the 1st win of his career on the 12th June when he won over 1600m at Northam for trainer Michael Grant. Dream Diamond is out of the Red Ransom mare Optimist. Optimist herself is a half-sister to three time Melbourne Cup winner Makybe Diva, one of the best racehorses in modern history. Dream Diamond was a $100,000 Belmont Bloodstock purchase from the 2012 Melbourne Yearling Sale.

HOLDER SUNSET
The first foal out of the stakes placed More Than Ready mare Montana Sunset became a winner on the 9th June at Kensington over 1000m for trainer Anthony Cummings. Holder Sunset is by Darley shuttle stallion Shamardal and now has a successful race record of 11 starts for 3 wins and 3 placings. The filly was a $260,000 Belmont Bloodstock purchase at the 2011 Sydney Easter Yearling Sale from the draft of Torryburn Stud.

TESTY SUE
The Testa Rossa 3yo filly Testy Sue won over 1200m at Pinjarra for trainer Michael Grant. Testy Sue is out of the Red Ransom mare Hayward and was a $170,000 purchase from the draft of Vinery Stud at the Sydney Easter Yearling Sale in 2012.

ULTIMATE SUCCESS
Resuming from a spell, gelding Ultimate Success (Blackfriars) was a convincing winner at Northam on the 2nd June for trainer Grant Williams. Ultimate Success is a half-brother to talented racehorse and multiple Group 1 winner Scenic Shot and is by champion Western Australian stallion Blackfriars who stands at Scenic Lodge. Belmont Bloodstock purchased Ultimate Success for client Bob Peters at the 2010 Perth Yearling Sale for $180,000 one of the top prices that year.