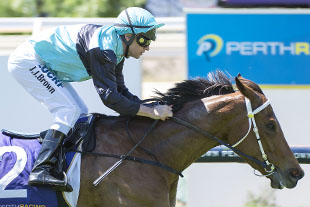 By Holly RossNovember 7, 2014General
No Comments

Talented 3yo filly Mamaroochy (Duporth) added another win to her career when winning the Variety WA & Perth Racing Handicap over 1000 metres at Ascot on the 1st November. She led all the way to beat Secret Nova (So Secret) by half a head at the line under jockey Jason Brown. It was the filly’s second win in a row and the third win of her career from only 5 starts a terrific strike rate for trainer Stephen Miller.

Mamaroochy is from the first crop of Kitchwins Hills Group 1 winning sprinter Duporth a son of Red Ransom and out of the Danehill mare Wishes. She was bred by the Toole family who own and breed from their property Kambula Stud in Kadina South Australia. Mamaroochy was a $30,000 purchase by Belmont Bloodstock from the draft of Kambula Stud at the 2013 Perth Yearling Sale.

She is owned by a syndicate of great mates including Craig and Wendy Yeo who Damon also successfully race a Blackfriars mare called Mendicity with, unfortunately Damon is not in Mamaroochy who looks set to have a bright future ahead of her.