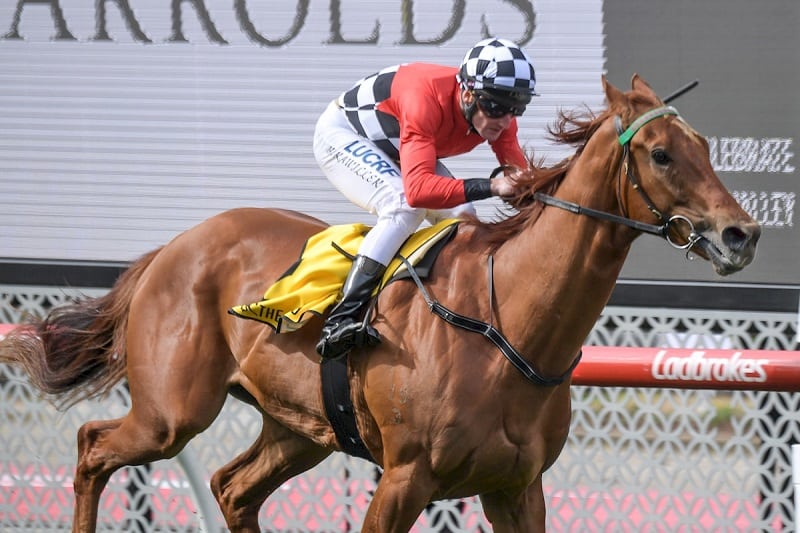 By Sally WilliamsNovember 26, 2018General
No Comments

Belmont Bloodstock agent Damon Gabbedy has only been to one Keeneland Sale, but that visit 11 years ago bore fruit in Saturday’s G1 Mackinnon S. with upset winner Trap For Fools (Poet’s Voice {GB}).

These days, Gabbedy spends a lot of his time and energy on the French market, as auction house Arqana’s Australian and New Zealand representative, but back in 2007, he was looking through a catalogue for the Keeneland November Sale when hip No. 2684 took his eye.

The mare, Old Money (Old Spice), had been a sensation in Western Australia seven years earlier, winning a G1 WA Derby as well as a G2 WA Oaks and a G2 Cox S. before being sold to America by her owner Bob Peters.

“I am very good friends and have known Bob Peters for years. He bred Old Money and obviously she was a star. She won a Derby, an Oaks, a Cox Stakes. She was a really good mare,” he told TDN AusNZ.

“Bob is not a traditional seller and he got offered a lot of money for her from America. She might have won a race over there but didn’t live up to expectations, and went to stud and hadn’t had a lot of luck. I noticed her in a Keeneland Broodmare Sale that I happened to be going to.”

Gabbedy, Perth-raised but now based in Melbourne, immediately called an old friend of his, Geoff Evans.

“I knew Geoff Evans very well from Perth. I told him that she was in there, knowing he liked staying mares and liked to try and breed stayers and he said let’s have a go and try and buy her,” he said.

She cost US$50,000, and Evans set about resurrecting a breeding career which had seen her produce just one live foal in her time in the US.

“When we were over there, we got her checked out and everything and did the research. They were quitting her because she wasn’t a success for them. We thought, oh well, at the price let’s give it a go,” he said.

One man that was glad to see Old Money return to Australia was her former trainer Lindsey Smith.

While the mare’s first two progeny, Street Tycoon (Street Sense {USA}) and Be Daring (Husson {Arg}) were trained on the Eastern seaboard without success, Smith was entrusted with her third foal, by Poet’s Voice, by Evans, who was named Trap For Fools.

“Early doors, he was quite slow in his work. I nearly sent him home but then he started galloping up the hill a couple of times. I rode him myself and rattled his cage a bit and he started show some signs,” Smith said.

“His heart rate was always quite low, so I worked him harder than I had most horses, so it was a case I had to bully him out of it.” – Lindsey Smith

“His heart rate was always quite low, so I worked him harder than I had most horses, so it was a case I had to bully him out of it.”

Trap For Fools’ debut in a 2-year-old maiden in May 2016 was certainly nothing to write home about, but Smith began to realise that the more work he poured into him, the more he improved.

“We took him to Belmont in his first start and he was awful, he got tailed off. It didn’t look good, but once again I rattled his cage and he went to Northam and he won and then lost on protest. Then he went to Kalgoorlie and led them all the way and he looked like he had potential that day,” he said.

While he showed none of the precocity of Old Money, who had won an Oaks and a Derby early in her 3-year-old year, Smith began to realise that the one characteristic he did share with his mother was his toughness, especially when ridden from the front.

“She raced every week for five weeks. She was super tough, that’s the Old Spice in her.” – Lindsey Smith

“She was super tough. In those days, they had the Derby and the Oaks this time of year and she was an early three-year old and she went on a winning way as well. She was favourite for the Perth Cup that year as a 3-year-old but she got sold to America two days before the race.

“She raced every week for five weeks. She was super tough, that’s the Old Spice in her.”

During spring last year, all Smith’s work seemed to be paying off as Trap For Fools went on an amazing winning run. Between late September and late December, he won eight races as the penny finally dropped.

‘The couple of years he had prior to that, he had built up his fitness to a level that not many horses can get to. The trick to him, he had to go to the lead, because when he got surrounded in a race, he tends to give it up,” Smith said.

“He was just one of those horses, who had to be made to be a racehorse.” – Lindsey Smith

“He was just one of those horses, who had to be made to be a racehorse.”

The other consequence of all those wins was it raised Trap For Fools rating to a point where Smith knew that it would be hard to place him in Perth.

Most trainers would agonise over such a decision, but the always pragmatic Smith suggested to Evans that the 5-year-old head to Victoria to be trained by Jarrod McLean, Darren Weir’s right hand man.

“It was common sense, I live here and the horse needed to go there.” – Lindsey Smith

“It was common sense, I live here and the horse needed to go there,” Smith said.

“Jarrod McLean has been here two or three times with Weir. We’ve got a relationship that we can both talk to each other, if I can help in anyway. I can.”

“The horse was at a rating where he needed an option to race all year around. That’s why I trusted in Jarrod.”

Smith’s trust in the Warrnambool-based trainer has now yielded a first Group 1 for McLean and Trap For Fools’ former trainer couldn’t be more pleased.

“It’s good for Jarrod to get his first one. He’s in good hands,” he said.

And McLean can expect a steady stream of horses from the west now.

“We’ve got another one here at the moment called Prize Catch (Zoffany {Ire}), he’s a 93 after winning yesterday and he’ll be headed to Jarrod’s,” he said.

Meanwhile, Smith is preparing Old Money’s final foal, Too Close The Sun, now a 3-year-old, for a racetrack career.

“I’ve got the brother by Carlton House (USA), he should be able to run seven miles this one,” she joked.

While Smith was celebrating Trap For Fools’ win at Ascot, Gabbedy was also delighted for his old friend Evans.

“We were cheering big time, I’ve worked with Geoff for years and I’ve only been to one Kentucky sale, I bought that mare,” Gabbedy said. “He thoroughly deserves that success.”