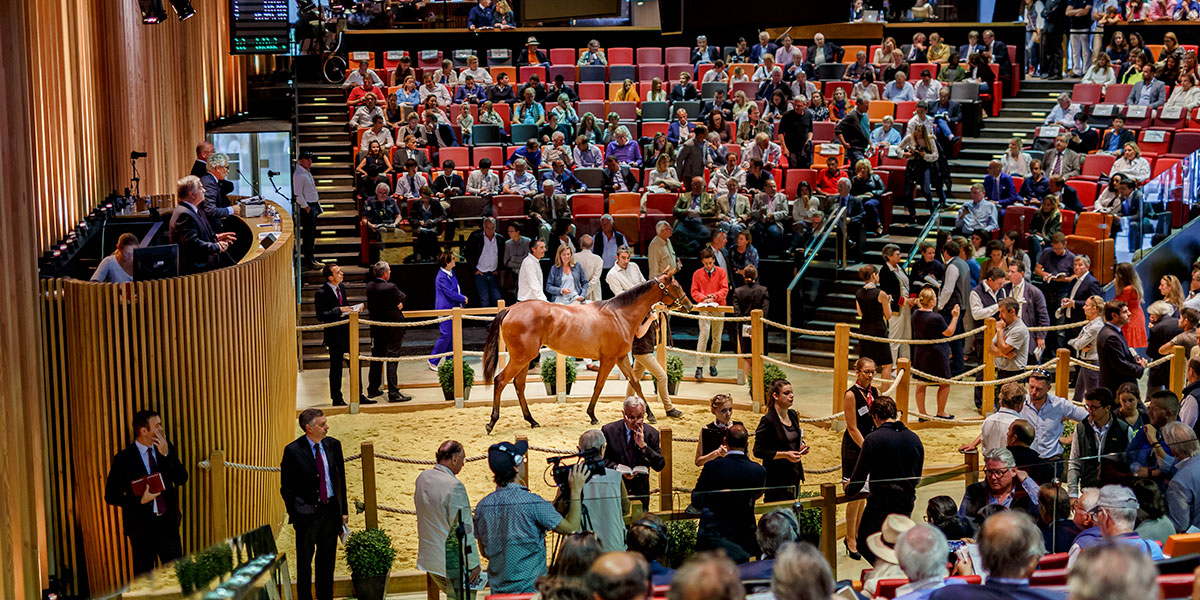 Arqana poised to welcome back Australasian contingent to Deauville

By Lauren DunningAugust 9, 2022General
No Comments
Following a few years of travel restrictions, Australasians will make the popular pilgrimage to Arqana for their August Yearling Sale, one of the highlights of the European sales calendar, which begins its three-day run on August 13.

A total of 313 lots have been catalogued which will go under the hammer at the picturesque sales complex in the centre of the French seaside town of Deauville and the auction house has typically assembled a group of youngsters brimming with depth and quality.

Arqana’s executive director Freddy Powell told TDN AusNZ, that after a few years with a smaller international presence, the auction house was looking forward to welcoming back the overseas contingent.

“After two years of being restricted in terms of travelling there are a few things that people had down to do when lockdown finished and I think coming back to Deauville in August was one of them,” said Powell.

Powell has described the catalogue ‘as one of the very best’ Arqana has ever collated, with Classic pedigrees at every turn, which will undoubtedly appeal to all audiences.

“I would say it is a very strong catalogue. If you took the 30 or 50 best pedigrees, I don’t think people would be surprised to hear me say it was the best catalogue we have ever had,” said Powell.

“I would say it is a very strong catalogue. If you took the 30 or 50 best pedigrees, I don’t think people would be surprised to hear me say it was the best catalogue we have ever had.” – Freddy Powell

“These are relations to proper Group 1 winners, who have won Group 1s that everyone knows all over the world and they are proper Classic pedigrees.”

The aforementioned three-quarter sister to G1 Prix de Diane winner is of course Nashwa (GB) (Frankel {GB}), who has already added a second Group 1 to her CV in the G1 Nassau S. since her record-breaking French Oaks win.

Catalogued as Lot 93, the daughter of Irish National Stud resident Decorated Knight (GB) will go through the ring on Saturday, and she will be one of the headline acts of the sale, but may have to be forced to share the spotlight with a filly by Sea The Stars (Ire), the first foal out of 2019 G1 Prix de Diane winner Channel (Ire) (Nathaniel {Ire}).

Meanwhile, Haras d’Haspel will offer another filly by Sea The Stars with equally smart credentials. The yearling is out of Koala (Fr) (Kodiac {GB}), herself a half-sister to Classic winners St Mark’s Basilica (Fr) and Magna Grecia (Ire), who both shuttle to Coolmore’s Australia base and the former is preparing to cover his first book of Australian mares this spring.

Lot 62 also boasts high-class relations, being a Siyouni (Fr) filly out of Needleleaf (GB), making her a half-sister to last year’s European Champion 2-Year-Old Native Trail (GB) (Oasis Dream {GB}), who landed the G1 National S. and G1 Dewhurst S. as a 2-year-old and added the G1 Irish 2000 Guineas to his record in May.

Gallery: Some of the highlight lots to be offered at the Arqana August Yearling Sale, images courtesy of Arqana

The G1 Prix de l’Arc de Triomphe is many people’s idea of the best race in the world and this year’s August Sale features a pair of yearlings with direct bloodlines to former winners of the Longchamp Group 1.

Arqana’s Australian and New Zealand representative Damon Gabbedy told TDN AusNZ the early feedback he had received from buyers echoed Powell’s assertion that the catalogue was among the very best the auction house had offered.

“I have already had quite a few people get in touch with me and they have told me it’s the best catalogue they’ve seen Arqana produce and I really thought that too when I was going through it for the first time, it’s a fantastic catalogue,” said Gabbedy.

With a diverse range of Australians set to make the trip to Deauville this year, Gabbedy said it was a good opportunity for the buyers from the Southern Hemisphere to familiarise themselves with the stock of some of the shuttlers who will be represented by their first yearlings in the Southern Hemisphere in 2023, such as Darley pair Blue Point (Ire), Too Darn Hot (GB) and Coolmore’s Magna Grecia (Ire).

“We have a few studmasters coming this year such as Peter Orton and Harry Mitchell and it will be a fascinating thing for them to have a look at the first yearlings by the shuttle stallions, like Blue Point, Too Darn Hot and Magna Grecia, who have only had foals in Australia.

“It will also be good to familiarise themselves with what Wootton Bassetts look like and Siyounis and Frankels,” said Gabbedy. “It is a good learning process to get to grips with the sort of types that stallions are producing, especially for the first-season sires, but also with the others as well. We have seen some of the first-season sires as weanlings, but seeing them as yearlings is even more beneficial.”

“It is a good learning process to get to grips with the sort of types that stallions are producing… We have seen some of the first-season sires as weanlings, but seeing them as yearlings is even more beneficial.” – Damon Gabbedy

Blue Point will be represented by eight yearlings in Deauville, while five youngsters by Too Darn Hot are set to go under the hammer and a pair of yearlings by Magna Grecia will be offered.

Powell said a lot of the kudos for the high-class catalogue is down to the French breeders who have made significant investment in high-class bloodstock over the past few years.

“French breeders in the last few years have really upped their game at the breeding stock sales and bought some good mares with beautiful pedigrees and we are seeing the results of that investment in the catalogue this year,” said Powell.

Gallery: Stallions that shuttle to Australia being represented at the Arqana August Yearling Sale

“It is very international and it is really high-quality. It is a tribute to the breeders in France, they have gone to stallions all over Europe, buying nice mares all over the world. I am not surprised that the catalogue is appealing to people in Australia and New Zealand, it’s a very international catalogue.”

Patience is a virtue

History will tell you that Europe is the good place to source middle-distance horses and in the past trainers and bloodstock agents from Australasia have ravaged the tried horses sales in the Northern Hemisphere, hunting for suitable stayers to target races such as the G1 Melbourne Cup, G1 Caulfield Cup and G1 Sydney Cup.

But, as the demand has rocketed for these types, so have the prices and Gabbedy said Australian buyers are now choosing to target the European yearlings to escape the premium prices that tried horses now cost.

“I think the main thing people are looking for is something a bit different that they can perhaps not buy at home, so they are probably not going to buy a Fastnet Rock or an Exceed And Excel, they are wanting something a little bit different.

“Given the strength of the tried horses market, trainers in Australia are being a little bit more patient and buying those staying-types as yearlings rather than waiting until they are tried horses.

“We have seen with trainers like Danny O’Brien souring the more staying type of yearling and he proved with Russian Camelot you can buy a standout horse as a yearling in the Northern Hemisphere.”