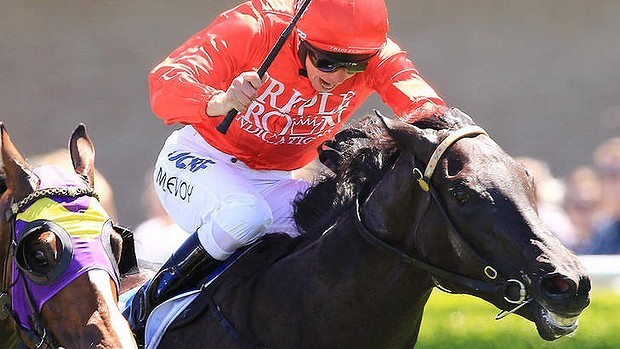 With all the hype surrounding the BMW Sydney Carnival and this year’s championships Belmont Bloodstock takes great pride in being associated with yet another Group 1 winner.

Peggy Jean was purchased as a pin-hooking prospect by Belmont Bloodstocks Damon Gabbedy from the draft of Donnybrook Estates at the Magic Millions 2012 Weanling Sale for Reggie Mackellar of Torryburn Stud at a giveaway price of $25,000. With an astute eye for potential performer’s Damon rated this filly on her presence, great walk and scope.
The daughter of Vinery Stud’s Group 1 winning stallion MyBoyCharlie was later sold at the Inglis Classic Yearling Sale for $46,000 to Triple Crown Syndications.

The talented filly dashed across the finish line under jockey Nash Rawiller, the combinations first race together much to the delight of trainer Gerald Ryan. Currently the hottest juvenile trainer Gerald Ryan is experiencing an extraordinary season having had 9 individual two year old winners of 14 races.

Gerald Ryan and Triple Crown Syndications have had great success together with the progeny of MyBoyCharlie also purchasing Charlie Boy a Group 2 winner.

Already being a Group 1 winner Peggy Jean’s value and future are assured. Special thanks to Reggie and the team at Torryburn Stud for their support of Belmont Bloodstock Agency.