By deanJune 6, 2011General
No Comments 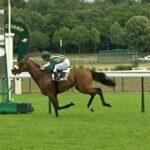 Melbourne business identities and great friends Peter Maher and Gerry Ryan tasted success at one of the world’s most famous racetracks, Longchamp, earlier this week.

Their 3 year-old Tucuman, a colt by Hawk Wing out of Spinning World mare Spinamix, won his second race in a row by leading all of the way over 2000m at this prestigious track which will host the Prix de l’Arc de Triomphe later in the year.

Peter Maher was in attendance at the 2009 Arqana Yearling Sales when he spotted this attractive colt in the Coulonces Consignment draft . Peter explained “I was really looking for a filly but when we spotted this colt I was impressed by what an athlete he was. They told me he was by Hawk Wing, a stallion we have had success with, namely a winning stakes placed filly Chausson Dore who is now in Australia under Gerry’s Limerick Lane operation (she has a Redoute’s Choice weanling colt and is in foal to Stratum).”

“This chap was such a loose, natural walker and really appealed to us. His dam had already produced a stakes winner by Daggers Drawn and stakes place getter by Exceed And Excel, so we had to have a go at him.” They eventually secured the colt for 90,000 euros, which now looks like money well spent.

Tucuman was sent to one of France’s leading trainers and legends Alain Royer-Dupre who is very familiar to us now through his Melbourne Cup hero Americain (part owned by Ryan as well). He is a progressive type that has now had 2 wins and 2 seconds from just 6 starts. Royer-Dupre is setting him for a stakes race at his next outing later in the month.

Peter added “The Arqana sale in Deauville in August is something racing and breeding enthusiasts must tick off their bucket list. Deauville is a gorgeous town with great food, fantastic racing and of course the French hospitality is second to none. Racing horses in France has become quite viable, as prizemoney is booming. Combine this with the French Premium Bonus Scheme (where 75% of all prize money earned is paid out as a bonus to French bred and qualified horses) and it makes for a great return to owners.”

For any further information on French racing and breeding or the Arqana sales, go to the ARQANA section of the website.