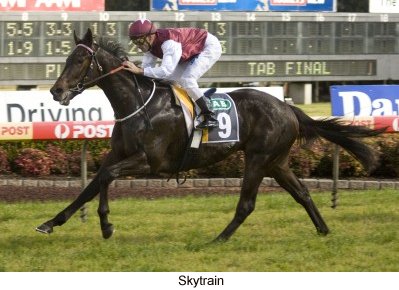 The Listed Showcounty Quality (1200m) was taken out by talented Lonhro gelding, Skytrain (ex Que Sera Sera). Trained by Peter Snowden, the Darley owned 6YO recorded his first stakes victory after being close up previously on several occasions.

Since the purchase, close relation and Group One winner Erewhon (Commands) has jumped into the family, adding more value and depth to this pedigree.

Sui Generis produced a filly by Jet Spur and is in foal to Chateau Istana. She will continue her Glenlogan connection by visiting their exciting first season sire Rothesay this year.

Meanwhile, Pinwheel’s stablemate Detours (Ad Valorem – Hairpin) earmarked herself as a 3YO filly to follow after running 3rd in the Group 3 Up & Coming Stakes (1200m).

Unbeaten in 2 previous starts, Detours will be one to follow as she progresses through the series of Group races for fillies on offer through the early part of the Sydney spring.

Belmont Bloodstock purchased Detour’s dam, Hairpin, in foal to Exceed & Excel from the 2010 Magic Millions mare sale for $65,000. The mare is now residing at Kambula Stud in South Australia.

This now appears to be a very good purchase, especially given that Hairpin produced a nice colt in 2010 by a stallion who is once again on the rise with star gallopers Helmet and Kulgrinda flying the flag for him locally. Exceed And Excel has now produced 40 stakes winners including this season’s Northern Hemisphere bred Group 1 winner Margot Did along with recent Coolmore acquisition and Group 2 winner Excelebration.