By Sally WilliamsMarch 25, 2013General
No Comments 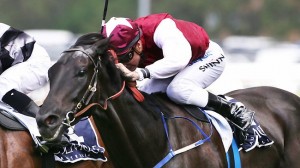 A Belmont Bloodstock purchased mare yet again appreciated in residual value over the weekend with the Group 1 victory of Appearance. Appearance (Commands) was the brilliant winner of the Group 1 Coolmore Classic at Rosehill on Saturday. Appearance was given a perfect ride by Blake Shinn to win over quality mares Red Tracer and Norzita.
Appearance is the third foal of Grand Lodge mare Disguise. Belmomnt Bloodstock negotiated the private sale of Disguise for a NSW based client last year. At the time of the purchase of Disguise, Appearance a Group 3 winner of the Keith Nolan at Kemnla Grange. Since then she has won two group one races, the Myer Classic in the Spring and now the Coolmore Classic, two of the most prestigious races for mares on the Australian racing calendar. Disguise is also the dam of another stakeswinner Mascareri (Commands).
The yearling full sister to Appearance was sold at Magic Millions Premier Sale on the Gold Coast this year for $200,000 to Princeton Thoroughbreds. Disguised foaled a filly by Domesday last year and was not served in 2012.
This new success highlights the importance of thorough research prior to purchasing a broodmare. Belmont Bloodstcock undertake extensive research into a potential prospects pedigree and identify key horses which could potentially go on to acheive stakes success just as Appearance has done for Disguise.
Some of Belmont Bloodstock’s recent broodmare purchases that have gone on to have stakes success with their progeny include; Spirited Dancer (dam of Lunar Rise), Hairpin (dam of Detours), Wynciti (dam of Haussman), La Melba (dam of Raspberries) anbd Ladidi (dam of Choice Bro).
The Inglis Easter Broodmare Sale is coming up on the 16, 17 and 18 of April, this sale presents an ideal opportunity to secure a mare for a reasonable price with potential to upgrade her pedigree in the near future. Belmont Blopodstock will be attending the sale.