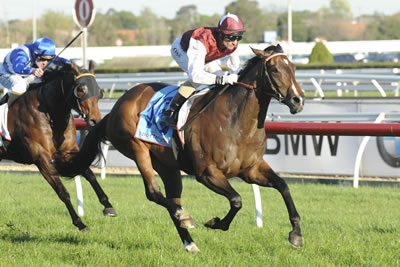 By deanSeptember 24, 2012General
No Comments 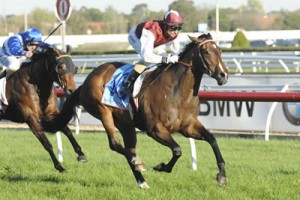 Buying a tried broodmare always carries a small degree of risk but that risk paid off on the weekend for two separate Belmont Bloodstock clients.

Damon Gabbedy purchased the two mares that have now subsequently produced black type winners from the 2010 Magic Millions National Broodmare Sale, interestingly both were offered for sale by Darley.

The first mare is Hairpin. Damon selected Hairpin from the Darley draft at the Magic Millions 2010 National Sale on behalf of Kambula Stud for $65,000.  Hairpin is a half sister to Group 3 winner Aichi and by Octaganal.  Hairpin is the dam of Detours (pictured left) the winner of Saturday’s Group III MRC Sportingbet Sprint at Caulfield.

Detours is a 4 year old Darley home bred filly by Ad Valorem.  She has shown promise for some time but Saturday was the day that she finally broke through for her first black type win.  Being the dam of a black type winner is a lucrative pedigree update for Hairpin.  Long time Belmont Bloodstock clients Brian and David Toole of Kambula Stud were ecstatic with the update especially since Hairpin has been a favourite mare on the farm.  Hairpin has already foaled a colt this season by hot young stallion Star Witness, she will return to Widden this season to visit Stratum.

Completing the Group double for Belmont Bloodstock clients was Lamasery (Commands) who won the Group 2 Hill Stakes at Randwick on Saturday.  Lamasery is the second foal of Quest for Fame mare Verse. Verse was purchased by Damon Gabbedy on behalf of Yarradale Stud for $30,000 from Darley at The Magic Millions National Sale in 2010.  It was not to first black type win for Lamasery who won The Group 3 Kingston Town Stakes at Rosehill last September as well as  the Listed Johnnie Walker at Flemington on Melbopurne Cup day last year as well as a third in the Group 1  Metropolitan, Saturday’s victory now takes his prize money earnings to over $600,000.  It looks as though there is a very bright spring ahead for the gelding who holds nominations in The Epsom Handicap, The Metropolitan, The Caulfield Cup and Cox Plate. 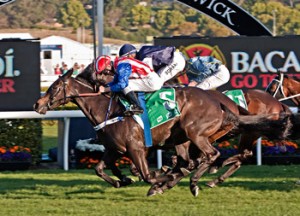 Verse has a yearling colt by Yarradale stallion De Troy who will likely be offered for sale at the 2013 edition of The Yarradale Stud Yearling Sale.

Ron Sayers of Yarradale Stud has had remarkable success along with Belmont Bloodstock in purchasing mares from Darley in the past.  Mr Sayers has also obtained La Melba (Dam of Raspberries) and Wynciti (dam of Haussman).

When purchasing broodmares, the Belmont Bloodstock team undergo extensive research into any activity that is happening in the mare’s family.  As well as identifying who the females in the family are breeding to, they look into the foals the mare has already procuced and endeavour to uncover any potential black type talent that will provide much coveted black type updates for the mares pedigree down the track.

Congratulations to The Toole Family of Kambula Stud along with Ron Sayers of Yarradale Stud.  Belmont Bloodstock love being able to help their valued clients achieve success in the sales ring and on the race track and these valuable pedigree updates will go a long way towards helping them achieve that.