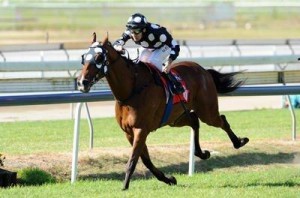 Ridden in his black-type debut by Michael Rodd, Solzhenitsyn (St Petersburg x Tri Victory) went straight to the lead and maintained his front running position when challenged by Group 1 winner Gathering (Tale of the Cat) at the 800 metres.

In the straight the five-year-old was never really in any danger, racing clear and holding his margin to the post to win by a length over the late finishing Firebolt (NZ) (Stravinsky) and Ginga Dude (NZ) (Istidaad).

A solid performance from a tough horse, Solzhenitsyn ran the last 600 metres of the Group 3 in 33.45 seconds and brought up back-to-back victories at Doomben after winning with James McDonald in the saddle on 12 May over 1350 metres.

Trained by Richard Otto before moving to Australia, Solzhenitsyn raced nine times in New Zealand for three wins and three placings and ran third to subsequent stakes winner Fazzle (Johar) at his last NZ appearance at Ellerslie on New Year’s Day in 2011.

Raced by Paul Willetts, Lawrence Nash, Cherry Taylor, Mr J Capo, Mr D Gabbedy and Mr A Watkins, Solzhenitsyn has now won an impressive eight of his 20 career starts for over $300,000 in stakes.