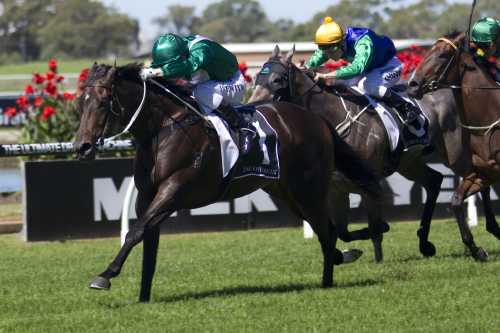 If the Slipper fits….Sama’Ready’ for The Golden Slipper

By deanMarch 26, 2012General
No Comments 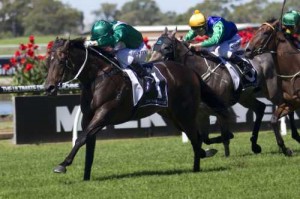 “There’s a big V8 Motor in that little filly.”

Samaready maintained her unbeaten record winning at her first attempt the NSW way of going and silenced any doubters with her dominant victory.

“I think she is actually better going this way.” Craig Newitt said after the race.

” She was on her Sydney leg the whole way, not a problem in the world.”

Samaready has firmed as favorite for the $3.5 Million Golden Slipper at Rosehill on April 4, now into $2.50.

Samaready was a $150,000 purchase from Inglis Easter Yearling Sale in 2011 for Damon Gabbedy of Belmont Bloodstock.  After Saturday’s efforts, the daughter of More Than Ready has now won $915,150 in prizemoney.

Samaready is striving to joing Champions Bounding Away (1986) and Courtza (1989) as the only fillies to complete the Blue Diamond/Golden Slipper double.

Mick Price admitted that his only worry was having Samaready peak again on Golden Slipper Day.

“She’s difficult to read because she lolls around and nothing bothers her.  Her weight is right and she will only need one more gallop before The Golden Slipper.”

Once again we congratulate Samaready’s owners Peter Orton, Greg Perry, Alan & Barb Green, Neville Gibson and Steve McCann and wish them the very best of luck for next Saturday’s Golden Slipper.  We will be cheering her home!