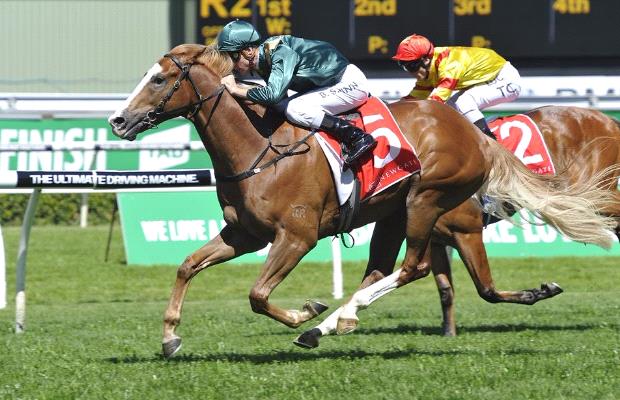 By Sally WilliamsOctober 4, 2016General
No Comments

The first two year old races of the new season kicked off on the weekend and the flashy chestnut colt KHAN was the eye catching winner of the Newgate Breeders Plate at Randwick.

Khan is by champion stallion Exceed and Excel from the French bred mare Mandawara, a daughter of Daylami.  Mandawara was purchased by Neil Jenkinson on behalf of Glenlogan Park Stud  from the Arqana Breeding Stock Sale in 2010 for 30,000 Euros.  Offered by her breeder The Aga Khan Stud, Mandawara is a half sister to subsequent 3 time Australian Group 1 winner Manighar.  At the time of Mandawara’s purchase, Manighar was a multiple stakeswinner in Europe however the pedigree received a significant boost when Manighar came to Australia in 2011 & won 3 successive Group 1 races.

Mandawara has a yearling filly by Zoustar but did not go in foal in 2015.  She also has an unraced 3YO filly by So You Think named Marli in work with Tony Noonan.  Marli is owned by OTI Racing who also raced Manighar.

Trained by Peter & Paul Snowden and ridden by Blake Shinn, Khan was a $260,000 Magic Millions purchase for James Harron Bloodstock from the draft of Glenlogan Park Stud.

“He has a pedigree that suggests he will get a lot further and he probably showed that today when he showed that the further he went the better he got,” said Peter Snowden.

“He is a very exiting colt and he has the ability to match those looks, if he was slow he would hard to hide, but it was a good effort from the team,” he said.

Snowden said that Khan may follow a similar path to Capitalist through to the Magic Millions 2YO Classic at the Gold Coast in January and then onto a path to the Golden Slipper.

The 2016 Arqana Breeding Stock Sale will be held in Deuville from 3-6 December.