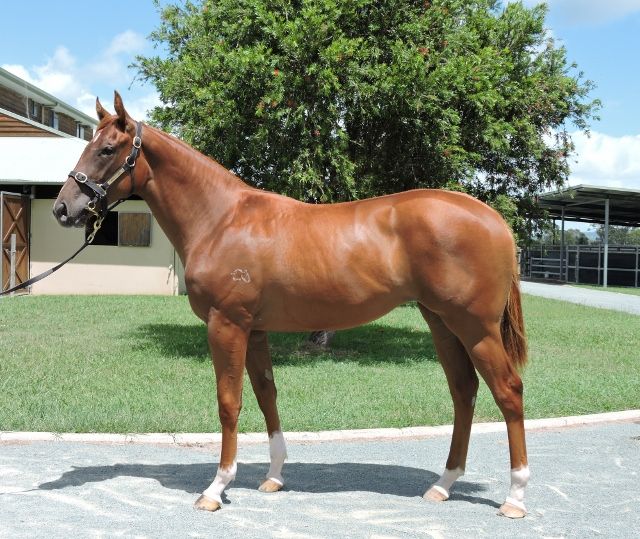 It is an art to successfully pin-hook, whether it’s turning weanlings into profitable yearlings, yearlings into racy 2 year olds or trading mares in foal it requires astute purchasing, the right market and a bit of luck.

In 2013 at the Great Southern Sale in Melbourne, Belmont Bloodstock purchased a mare for Victorian based Woodside Park Stud called In Expectation from the draft of Yarran at a bargain price of $50,000. In Expectation is a lightly raced, winning mare by champion sire More Than Ready who was in foal for the third time, to first season sire Helmet.

This year at the 2015 Magic Millions Gold Coast Yearling Sale the resulting progeny, a colt by Helmet sold to China Horse Club for $230,000 an incredible result and the top priced Helmet of the Sale. In his first season Helmet stood at a service fee of $33,000 so the result is an outstanding return on investment in such a short period. In Expectation has a 2014 Artie Schiller colt at foot and was covered by Magnus in 2014.

Woodside Park Stud also had another very successful purchase in 2013 when Belmont Bloodstock acquired the mare Ryzhkina from the 2013 Inglis Easter Broodmare Sale. She was purchased from the draft of Yarraman Park Stud for $145,000 in foal to Northern Meteor, unknowingly his last crop.

The resulting progeny was a chestnut filly who sold for $420,000 at the 2015 Melbourne Premier Yearling Sale making her the most expensive Northern Meteor filly to be sold at auction and the second highest price of the sale. Northern Meteor stood for $33,000 in his final year at stud.