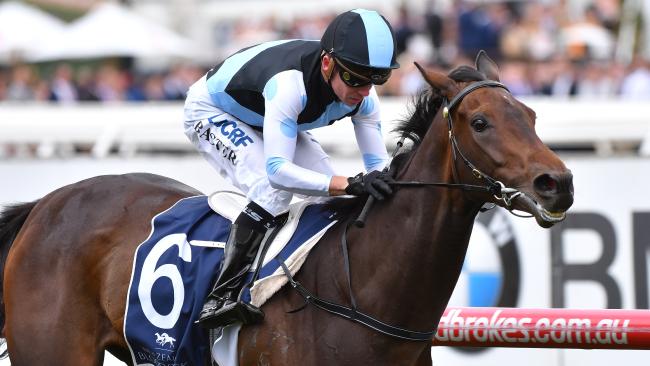 By Sally WilliamsOctober 23, 2017General
No Comments

Caulfield Cup day was a successful one for Belmont Bloodstock with the progeny of broodmares the agency has purchased winning two black type races. 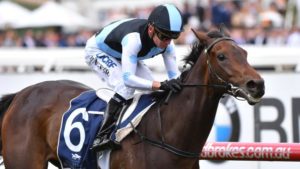 PINOT was a dominant winner the Listed Ethereal Stakes (2000m).  PINOT is another impressive performer by a stallion who is really starting to make his mark in Pierro.

PINOT will now look to emulate her dam Dizelle in winning an Oaks and will press on towards the VRC Oaks.

Dizelle obviously needs no introduction, a daughter of the chamion sire Zabeel she was the winner of the ATC Oaks.  Belmont Bloodstock negotiated the private purchase of Dizelle earlier this year on behalf of Wilf & Rosemary Mula’s Aston Bloodstock.

At the time of the sale, Dizelle had already produced the stakes winner Dizlago and is now an even more valuable commodity with PINOT her second stakeswinner who looks to have Group One ability.

Dizelle holds a special place in the heart of Belmont Bloodstock’s Damon Gabbedy as he sold her dam Danelagh for in excess of one million dollars to Darley in 2002.

Dizelle & Danelagh were both sold by their breeder Keith Biggs who the Gabbedy family have had a long and successful association with.  In the eighties, Damon’s father John bred Paklani (Halupak) who was a multiple stakes winner for Keith Biggs.

Rounding out the Belmont Bloodstock stakes double was FUHRYK in the Listed Alinghi Stakes.  The win was the third of the black type kind for the daughter of Star Witness who was bred by Michael Christian’s Saconi Thoroughbreds and sold through the Rosemont Stud draft at the Melbourne Premier Sale. 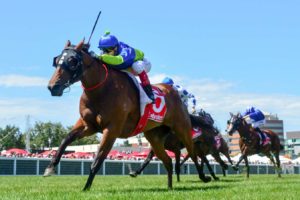 Belmont Bloodstock purchased FUHRYK’s dam Fuhrnatic at the 2015 Magic Millions National Sale for Robert Crabtree’s Dorrington Farm for now what looks to be a modest amount of $40,000.

At the time of the purchase, FUHRYK was only a yearling and Fuhrnatic had only had Standup’ndeliver to race for a placing.  Fuhrnatic, who is twice stakes placed herself was in foal to All Too Hard.  The resultant filly by All Too Hard sold for $500,000 to Bahen Bloodstock earlier this year at the Inglis Melbourne Premier Sale.  The pedigree has improved significantly with Fuhrnatic having three foals to race for three winners including a multiple stakeswinner.  To say that the $40,000 purchase price has been a good investment would be an understatement.  It’s a very pleasing result for wonderful supporters Dorrington Farm.

Fuhrnatic has a yearling by Magnus and is due to foal to Crabtree’s ever successful stallion Magnus again this season.