Samaready Back & Better Then Ever!

By Sally WilliamsSeptember 30, 2013General
No Comments 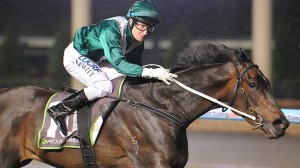 SAMAREADY put forward a compelling case to suggest she is Australias best sprinter with a stunning performance in the Group 1 Moir Stakes at Moonee Valley.

Her jockey Craig Newitt summed up the performance last night with a simple “wow” before expanding to say the win smacked of arrogance.

The ease of the win didn’t surprise Newitt as he said he was blown away by her trackwork at Moonee Valley last Monday morning.

“To me that was the best she had worked since before she won the Blue Diamond and it was probably better than then,” Newitt said.

Trainer Mick Price also described the win as arrogant and said she would probably have her next start in the Manikato Stakes at Moonee Valley on October 26.

Samaready, a four-year-old mare, took her record to six wins from eight starts.

Her only defeats were a third in the 2012 Golden Slipper Stakes after having had a torrid run and a fourth in the Quezette Stakes on a heavy track at her only start as a three-year-old filly before being sidelined with a tear in her backside for a year.

Price said physically Samaready could not be in better shape.

Price thanked one of Samaready’s owners, Peter Orton, for not letting her leave Vinery Stud until her injury had healed.