By deanAugust 23, 2012General
No Comments 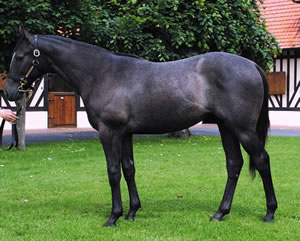 The select first two days of the ARQANA Deauville Yearling Sale concluded on Monday with a colt from the first crop of Sea the Stars topping the sale, which seemed more or less on a par with last year.

Throughout this first part of the sale, 31 yearlings changed hands for more than €200,000 and were bought by clients from all over the world.

At around 6:15pm, the ring became packed with industry professionals keen to see the eagerly awaited and uncontested star of the catalogue, the very first offspring by two top class Group 1 winners.

Indeed, the good looking grey colt (pictured) going through as lot 120 is the result of a mating between six time Group 1 winner Sea The Stars and the Linamix mare Alpine Rose, a worthy representative of the great Lagardère family of Fragrant Hill.

His story is inextricably linked with Deauville and the sales as his dam, bred by the Aga Khan Studs, was bought for €550,000 at the 2009 December breeding stock sale by Suprina (Patricia Boutin–‐Miller) acting on behalf of a partnership formed by Skymarc Farm (Lady O’Reilly), Ecurie des Monceaux and Charles–‐Henri de Moussac.

In August 2010, she took the Group 1 Prix Jean Romanet over 2000 metres in Deauville with a flawless performance, running in the colours of Ecurie des Monceaux who were consigning her first offspring today.

As for Sea The Stars, his dam Urban Sea went through the ring in August 1990. She later went on to become the champion race mare and exceptional broodmare that we all know. It was therefore no wonder that lot 120 was so sought after, most notably by David Redvers and Shadwell.

In the end, the hammer fell at €1,200,000 and the colt, who will go into training with Alain de Royer–‐Dupré, was knocked down to Nicolas de Watrigant (Mandore International Agency) on behalf of Sheikh Joaan Bin Hamad Al Thani.

Of interest to Australian breeders was the reception afforded the small draft of youngsters by Fastnet Rock, whose filly (pictured) from Dance to the Top fetched 380,000 to the bid of Demi O’Byrne to be the sixth highest priced result at this sale.

The other two fillies by Fastnet Rock (from Mer de Corail and Place de L’Etoile) sold for 180,000 to Form Bloodstock and 45,000 to Belmont Bloodstock respectively.

ARQANA chairman Eric Hoyeau commented on this first part of the sale, “The percentage of horses sold equivalent to last year and the increase in the average sale price are both satisfying elements in the face of a demanding market, made up of buyers from all over the world.

One remarkable feat to note was that two yearlings consigned by Ecurie des Monceaux topped the symbolic €1 million threshold in the first two days of the sale. We would like to thank buyers who came from all over the world as well as vendors who entrusted us with their yearlings.”