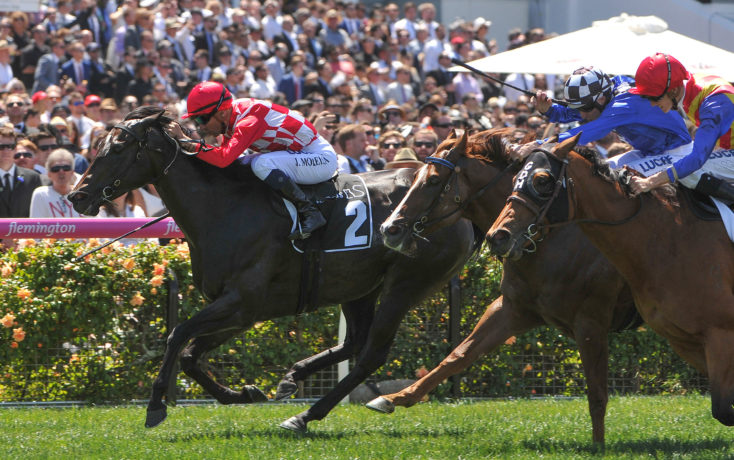 By Sally WilliamsJanuary 3, 2017General
No Comments

A four year old mare at the time of sale, Sheidel was a 3 time Listed winner in her home state of Western Australia.

Belmont Bloodstock’s Damon Gabbedy had been involved in the mating of SHEIDEL when he booked her dam Laventour to Coolmore stallion Holy Roman Emperor on of  WA breeder Des De Largie.

Robert & Sylvie Crabtree of Dorrington Farm purchased Sheidel privately through Belmont Bloodstock upon Damon’s sound advice that the mare already held significant residual value as a broodmare but identified that she deserved the chance to attempt some black type races in the Eastern states.

Sheidel was transferred the Lindsay Park training partnership of David & Ben Hayes and Tom Dabernig.  At her third start for her new trainers, Shidel won the Listed Bel Esprit Stakes at Caulfield.  She then went on to be a most unlucky second by the very narrowest of margins in the Group 1 Robert Sangster Stakes in Adelaide.

After a break, Sheidel reappeared in the spring brilliantly winning the Group 3 Cape Grim Beef Stakes at Caulfield and then put on a most impressive display claiming victory in the Group 3 Sensis Stakes at Flemington on Derby Day.  She was 5th in a hotly contested Group 1 Darley Classic down the Flemington straight before it was decided she would return to her home state WA to take her place in the Group 1 Winterbottom Stakes.

Sheidel ran the race of her life in the Winterbottom to be just nosed out by 0.2 of a length into 2nd by Takedown.

We congratulate Sheidel’s owners Rob & Sylvie Crabtree who have enjoyed great excitement with the mare over the last 12 months and have her next campaign to look forward to.  They also have the upside of a very valuable broodmare to breed with over the coming years.