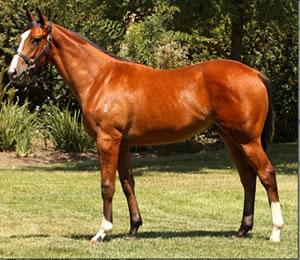 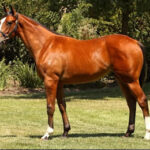 Australian bred three year-old Castlethorpe (pictured left, as a yearling) claimed the biggest win of his career at Kenilworth in South Africa on Saturday when taking out the Group III Tekkie Town Winter Guineas.

The Mike Bass trained gelding overcame an outside draw to win the 1600 metre feature by a length, his overall record now four wins from 11 starts, two of those wins coming since he was gelded, a move that has allowed the talented three year-old find his best form.

A $50,000 purchase for his trainer from the Blue Gum Farm draft at the 2009 Inglis Premier Yearling Sale, Castlethorpe is one of seven winners, but the first stakes-winner for Sadler’s Wells mare Park Heiress (IRE).

A three-quarter sister to English Derby winner and Champion 3YO New Approach, Park Heiress is a daughter of Group I winner and champion filly Park Express.

She started her stud career in Australia for Arrowfield Stud, but was onsold in 2007 when purchased by Damon Gabbedy’s Belmont Bloodstock for $38,000 on behalf of owner/breeder Frank Meduri, who has enjoyed much success as one of the part-owners of Elvstroem and Haradasun.

In foal to Not a Single Doubt when she was sold, the result of that mating is Castlethorpe. Park Heiress has a two year-old colt by Elvstroem, a yearling filly by Haradasun and was covered by Elvstroem again last spring.

Castlethorpe is the sixth stakes-winner for Arrowfield based Not a Single Doubt, whose service fee has been raised for 2011 to $24,750.