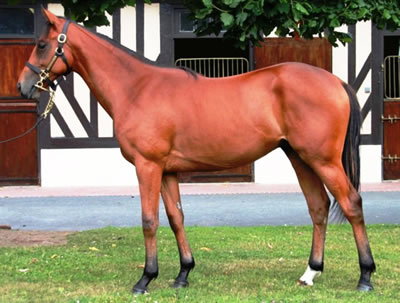 By Sally WilliamsOctober 4, 2016General
No Comments

HK based Sun Stud enjoyed Group I success in France over the weekend with their top class Invincible Spirit colt National Defense taking out the Group I Prix Jean-Luc Lagardere over 1600 metres at Chantilly on Arc Day.

Trained by Criquette Head-Maarek, National Defense bolted away to lead throughout and win the feature by more than four lengths, his second win from just three starts.

“He is not a difficult horse but he has a lot of energy,” said Head-Maarek.

“The other day he didn’t settle in behind and so I told Pierre-Charles to let him go on like he did on debut at Deauville. He is a very good horse.”

National Defense was bought by Sun Bloodstock at the Arqana Deauville August Yearling Sale last year for 280,000 euros and is the best of three winners from Angel Falls, an unraced Kingmambo sibling to stakes-winners Anna Salai, Iguazu Falls and Advice.

This female family has enjoyed a great deal of success in Australia through Darley’s imported mare Accessories (GB), the dam of Group I winners Helmet, Epaulette and Group winners Pearls and Bullbars.

National Defense is the 15th Group I winner for Invincible Spirit, whose Australian bred sire son I Am Invincible has become one of the leading young sires in the country.

Sun Stud in Australia has bases in Victoria and Queensland and is home to 13 stallions including Not a Single Doubt’s Squamosa, who sired his first winner in New Zealand on Saturday.