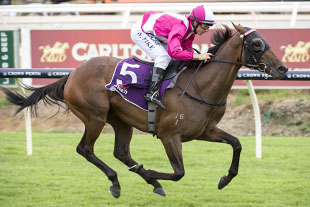 By Holly RossFebruary 4, 2015General
No Comments

Belmont Bloodstock and the Western Australian combination of owners Bob and Sandra Peters, trainer Grant Williams and Jockey William Pike have kicked off the new year in impressive style with two exciting 3yo winners Evening Rose and King River.

Evening Rose conquered her rivals in her last 2 starts brilliantly winning the Lark Hill Vets Maiden at Pinjarra over 1600m on the 22nd January and then went on to win at Ascot over 1600m 9 days later with a devastating last to first win. These recent victories bring the filly’s race record to 2 wins from only 5 starts.

The 3yo filly was a $220,000 purchase for long term client and friend Bob Peters from the draft of Tyreel Stud at the 2013 Inglis Easter Yearling Sale. She is by dual hemisphere champion sire Street Cry the sire of 86 individual stakes winners including champions Zenyatta, Street Sense, Whobegotyou and Shocking.

Evening Rose is bred to be a middle distance and oaks prospect and was purchased with this in mind. She is the 5th foal out of champion NZ stayer Bramble Rose who won the Group 1 New Zealand Oaks, was 2nd in the Group 1 Arrowfield Stud Stakes, 2nd in the Group 2 Waikato RC Sir Tristram Fillies Classic and 3rd in the AJC Australian Oaks. Evening Rose is also a half-sister to stakes winner Maules Creek who won the Listed ATC Randwick City Stakes over 2000m.

Evening Rose looks set for bigger and better things and don’t be surprised to see her lining up in the upcoming WA Oaks! 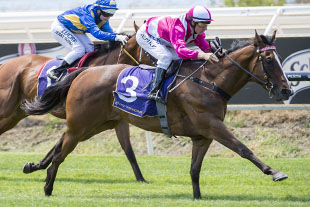 Also successful on the track in recent weeks for the same combination is exciting galloper King River who won his first start over 1200m at Pinjarra on the 14th of Jan defeating the older horses. He then went on to easily win his 2nd start 10 days later at Ascot in the Westspeed 3yo handicap where he showed a great turn of foot after getting shifted back before the turn to easily account for his rivals taking the win being eased down over the line.

King River was a $220,000 Belmont Bloodstock purchase from the 2013 Magic Millions Yearling sale from the draft of Stuart Ramsey’s Turangga Farm.

King River is by Haradasun a champion racehorse and triple Group 1 winner, interestingly enough the Peters have had great success with the progeny of the former Coolmore resident. There homebred Respondent won 4 races including the Group 2 WATC West Australian Derby, the Listed WATC Lex Piper Stakes and the Listed WATC JC Roberts Stakes with prize-money earnings of $558,390.

King River is beautifully bred being out of the stakes winning Danehill mare Niagara Falls while in training with Peter Moody she won the Group 3 Carlyon Cup, the Listed SAJC Dequetteville Stakes and the Listed MRC Lord Stakes. King River is also a half-brother to talented Group 2 winner Elite Falls a daughter of More Than Ready who won the Group 2 ATC Reisling Stakes, was 2nd in the Group 1 Oakleigh Plate and 3rd in the Group 1 Golden Slipper for Keith Biggs another WA owner.

Turangga Farm will offer a More Than Ready colt out of Niagara Falls at this year’s Sydney Easter Yearling Sale.